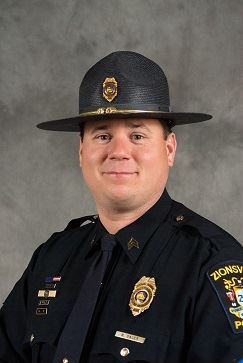 In 1997, the Zionsville Police Bike Patrol was created to aid in patrolling areas difficult to cover with a patrol car and to foster a better relationship with the community. A patrol vehicle can be a big barrier between officers and citizens, while Officers on bicycles are much more approachable, especially to children. Many citizens are excited about the bike patrol and appreciate this type of Police presence in the town.
Responsibilities
Bike Officers perform the same duties as Officers in vehicles. They stop vehicles for traffic infractions, answer service calls, and patrol the neighborhoods and the town parks. The bicycles give officers the added advantage of “stealth, ” making it possible to observe crimes undetected and sweep in almost undetected to make apprehensions.

Personnel
The Bike Patrol started with 5 members, 1 full-time officer and 4 reserve officers. Initially, 2 bicycles were purchased, and then a 3rd bicycle was added mid-season with donated funds from the public. The bicycles are Trek Police Bikes completely outfitted with normal operating and emergency lights, bags, fenders, and a “ROC SHOCK” suspension system. Each officer is issued a complete uniform consisting of high visibility shirts, bicycle shorts, and light weight nylon gun belts. Each officer is also issued a Trek bicycle helmet that must be worn at all times while riding the bikes.
Staff Duty & Continued Training
In 2013, 7 officers staff the Bike Patrol Unit. The officers are required to work a minimum of 2 shifts a month throughout the weeks from May to September. The Police Bikes are also utilized during the week at various times and at all Special Events in the town of Zionsville.

All members of the Bike Patrol must attend a yearly 8-hour training course on braking, evasive maneuvers, dismounts, stair riding, and various other skills.

The Bike Patrol has been an outstanding success by increasing the level of police presence in the downtown area and the 230 acres of park systems around town. The public seems to have nothing but good things to say about the added police protection and the good public relations that are generated by the Zionsville Police Bike Patrol.