The Zionsville Wastewater Treatment Plant is a Class III, two million gallon per day facility located at 855 Starkey Road. The last plant expansion was completed in 2003.

The facility serves the Town of Zionsville with approximately 70 miles of sanitary sewers and 26 lift (pumping) stations. 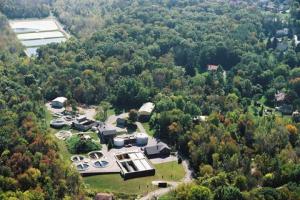 History of the Department

The Town’s first sanitary sewer system was installed in the mid-1920’s and utilized a “Town Septic Tank” as its means of treatment. In 1956, the Town built its first full scale secondary treatment plant located at its present site. The plant consisted of primary tanks, trickling filters, a chlorine contact tank, tertiary polishing ponds, anaerobic digesters and drying bends. The plant had a capacity of 500,000 gallons per day and served the Town for the next 30 years.

In the early 1980’s, the Town qualified for one of the last EPA grants and expanded the plant to a 960,000 gallons per day facility. The plant was converted from a trickling filter plant to an activated sludge plant. Sludge handling capability was added by way of a belt filter press.

Later expansions have included a biosolids storage facility, upgrades in treatment capacity and storage capacity and a new belt filter press. The last plant expansion was completed in 2003 and brought the total treatment to 2 million gallons per day.
Possible Sycamore Bend Sewer Connection

Recently there has been an interest in revisiting the possible connection of Sycamore Bend into the town sewer system. We have been informed of some turnover of homeowners as well as homeowners that are now or have experienced septic issues since the last time this was addressed.

There will be a new lift station called the West Regional Lift Station that will be going in near the corner of 550 South and 875 East on the northwestern corner. This will have the capacity and may have the ability to serve the residents of Sycamore Bend via gravity sewer and if not with a low pressure force main and grinder pump at each residence. None of this work has yet been engineered and has only been discussed internally. This is only an exercise to see what percentage of homes within this area would have an interest if it were affordable and available to connect to. If not enough interest exists, then this part of the discussion will be dropped for now, but could be revisited in the future.

We would like to have responses back on line no later than close of the business day on July 24.

Note: This survey is for interest purposes only. Saying yes does not commit the homeowner to connecting. We understand not having the cost makes it difficult, but at this time we are asking if it was made available, would you connect.

DISCLAIMER: All boundary representations linked/displayed on this webpage are not authoritative and should not be relied on as such. Official source material shall supersede any discrepancies with map representations/exhibits.

For a map of rural vs. urban service districts, please visit the Homeowner's Association webpage.